Push for profits at Daimler Mobility and BMW as joint venture targets expansion, but exits US and three European locations 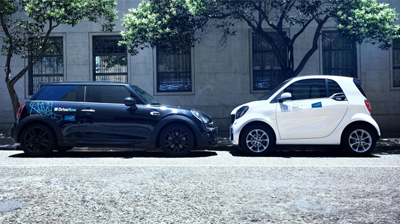 The mobility joint venture between BMW and Daimler is ending its car-sharing service in the US and three European locations to focus on delivering profitability across its transport platforms.

The Share Now car-sharing service will cease operating in London, Brussels, Florence and the US in February 2020 as part of a strategic rethink for its services that also include car sharing, ride hailing, parking, electric vehicle charging and multimodal platforms, which are offered in more than 1,300 cities worldwide and used by 90 million customers.

A statement on its Share Now UK site in London said: “Although more and more Londoners integrated our service in their daily mobility behaviour, we have had to face the hard reality that we could still not convince enough people to do so. To make our car sharing service successful in a city strongly depends on the respective market circumstances.

“The number of customers in London and their demand for our car sharing service was below our expectations and lower than in other Share Now cities. Furthermore, we had to face local factors, like high costs of operation and the different circumstances in the single boroughs.”

Executives at BMW Group and Daimler Mobility said that Share Now will continue to be developed following the integration of the car2go and DriveNow brands as a single free-floating car-sharing provider; it registered 1 million new customers during 2019.

Share Now launched in Paris, France in January and Budapest, Hungary in April, with executives saying: “In the future, the focus will be on cities that promise long-term profitable growth. A review is currently underway to determine where reorganisation may be needed.”

A new Share Now app is also being rolled out, allowing vehicles to be reserved and rented directly for up to 14 days.

Rainer Feurer, senior vice-president of investment at BMW Group, said: “As a shareholder, we firmly believe that combining the services into three pillars will strengthen the joint ventures’ impact and focus in a highly competitive, fast-growing environment. Both shareholders are determined to develop the joint ventures into a leading player in the mobility market.”

Franz Reiner, chief executive officer of Daimler Mobility, added: “We are setting the course for the joint ventures to achieve sustainable profitability. At the same time, partnerships are increasingly important to success in the marketplace and, in this respect, we are open to further stepping up growth.”

It is heading for record earnings for 2019 with annual revenues of €2 billion. Trips taken using its platform were up 120% year-on-year during 2019.

Next year, Free Now will integrate additional services into its app including e-scooters, electric bikes, car sharing and public transport, to be offered alongside its ride-hailing business.

Park Now lets customers use an app to search and pay for on or off-road parking spaces. In 2019, 36 million customers in 10 European countries and the US used its services, as it reached 230 million transactions for its core brand and other products including Parkmobile, RingGo and Parkline.

The restructuring reflects the challenges of developing profitable car-sharing services.

Earlier this year, GM pulled its Maven car-sharing service out of several cities, while Ford closed its van-hailing app Chariot and sold its car subscription business to Fair.

Speaking at the Move 2019 urban mobility conference in London, Brian Collie, senior partner and managing director, Boston Consulting Group, said: “For start-ups in this industry, most won’t be here in 15 years’ time. There are more than 3,000 companies competing for five to seven slots in each area. There are no more than around five companies needed in each area because there is not room for 50 companies to thrive.”

The manufacturer will provide 1,500 electric versions of its iconic Golf for the service, with an additional 500 e-up! city cars added at a later date.

It will also add the new full-electric ID.3 to the fleet following its official launch next year.

The WeShare service is ‘free-floating’, so vehicles can be left anywhere within a designated zone covering around 150 square kilometres in the city centre. Customers find the nearest vehicle and secure a booking using a smartphone app, then pay a time-based fee for each use.

Following the launch in Berlin, WeShare will expand to Hamburg in 2020 and also to Prague, Czech Republic, in partnership with Skoda.

The market is also attracting independent platforms, such as US-based car-sharing provider Getaround which has taken the first step of its global expansion with the acquisition of European peer-to-peer rental platform Drivy for $300 million.

Drivy is the largest and fastest-growing car-sharing service in Europe, with the two companies sharing a business model that allows vehicle owners to provide their cars for rent when they aren’t being used.