The UK government has stressed its ambition to see at least half of new cars to be ultra-low emission by 2030 as part of plans to make the UK the best place in the world to build and own an electric vehicle (EV).

The proposals are outlined in the Road to Zero strategy, which sets out plans to enable a massive expansion of green infrastructure across the country, reduce emissions from the vehicles already on the UK’s roads, and drive the uptake of zero emission cars, vans and trucks.

However, a recent study by Rivervale Leasing suggests government plans are not going smoothly. 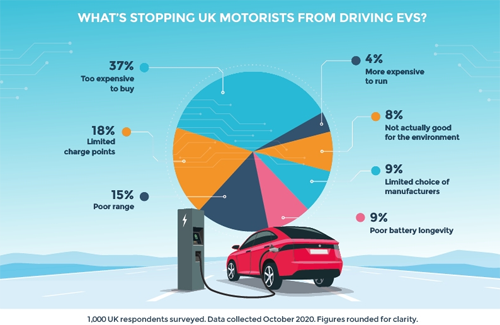 The study shows that drivers won’t make the switch because of high costs, limited charging access and poor range, but is any of this true?

The survey reveals that drivers have outdated ideas of EVs as they don’t think they have developed over the past five years.

Rivervale’s survey found that drivers’ mains concerns were EVs being too expensive, as 37% said they wouldn’t buy one because of the cost, yet 90% of new cars are financed, so the expensive initial cost only affects one in 10 drivers who purchase their vehicle outright.

Electric cars have been shown to be cheaper to run, as the monthly costs are less than the equivalent petrol version, which could save customers an average of £107 a year.

Strangely, one in 10 drivers believe that there is a limited choice of EV manufacturers available. However, 40 manufacturers are currently producing electric cars, including well-known brands like Tesla, Audi, Mercedes-Benz, Ford and Volkswagen.

Rivervale analysed tweets from Jan-Oct 2020 to find out how the UK really feels about electric cars. The data revealed that shows Leeds has the worst view of EVs with 35% of tweets about EVs having negative connotations. They were closely follow by Manchester and Bristol with 34% and 33% respectively. Liverpool is the most forward-thinking city, with 68% of tweets showing optimism towards electric vehicles.

You can see more about the survey here.