With the recent International Accounting Standards Board (IASB) and European Financial Reporting Advisory Group (EFRAG) meetings, it has become clear that the IASB chairman, Hans Hoogervorst, is more concerned about the political implications of leasing than about lease accounting itself.

From the lease disclosure item in the January agenda of IASB, it is clear that whatever outcome on-balance sheet, additional disclosures to satisfy investors and analysts will be introduced.

Is it correct to conclude that the IASB chairman is at this point actually cultivating the differences of opinion between US Financial Accounting Standards Board (FASB) and IASB in order to put pressure on EFRAG not to come up with a third (European) outcome regarding the leasing project?

It very much looked like it when he warned EFRAG to close ranks and avoid further discrepancies.

And just perhaps because it is about time to finish the project, after eight years of inconsistent, incoherent and/or incorrect views on lease accounting?

And don’t forget: the number of deviations from ED 2013 are so numerous that most people have lost oversight of the current state of play.

It is not just, as they requested in the meeting, for EFRAG’s use to have comprehensive new wording.

Also, it would be fatal to the project, from a quality- as well as a governance-perspective, when no comments to the (yet to be produced) wording were allowed.

The staff of IASB and FASB have argued the case why additional disclosures are needed. The overriding reason mentioned is the need to satisfy analysts and investors in allowing them to understand the impact of leases on the balance sheet and profit and loss accounts (P&L).

Isn’t it surprising that professionals need extensive elaborations on leases when the boards have gone to great length to make leases similar to other assets and other liabilities which are already on-balance and have their own sets of disclosures? - requirements that so far were not contradicted to present sufficient disclosure to these assets and liabilities.

The tabular lease information suggested by the Boards’ staff will not provide investors and analysts with the required information for their understanding of leases as it simply is not informative enough and even may pose new questions itself. The main problem is twofold:

● cash flow and P&L accounts do not match.

The latter point is true for ordinary (PPE) assets purchased too, but in these cases no intermediary payments take place that are linked to the assets: the funding and its repayment is seen as something completely unrelated. This fact should be accepted for leases too in the disclosure area, otherwise onerous requirements will result.

Alternatively, the requirement for additional comprehensive cash-flow information on leases begs the question why this information is required for leases and not for any of the other PPE assets: what is the interest charge paid for PPE assets? Nobody asks for this specific information currently. Perhaps because there is no straight answer: funding could be with (non-cash) equity only.

So maybe the analysts’ problems are not with leases but with the rest of the balance sheet.

This brings to light an old complaint regarding leases: leases are cash-flow driven and it simply makes no sense to deviate cash flow and depreciation for leased assets while trying to understand what a lease is - from the remaining booking entries.

Unlike PPE, leases are self-funded assets of which the value diminishes with the payment of the lease liabilities over time: asset and liability are self-liquidating simultaneously.

The question of which future payments may arise from leases (as indicated by the IASB staff as an analyst requirement) is in fact a non-issue: maturity schedules on the liability side sufficiently explain the potential future thread of required financing for future activities. This is true for PPE and leased assets alike and is more of a general concern in case of a liquidity squeeze.

To illustrate the effects of differences between depreciation and cash flow and to show that it is hard to derive meaningful information from the tabular schedule presented in the January meeting, see the following example:

The calculations for a PPE (purchased asset) versus a lease for various residual values and different interest percentages applied in the lease result in the below P&L schedules: 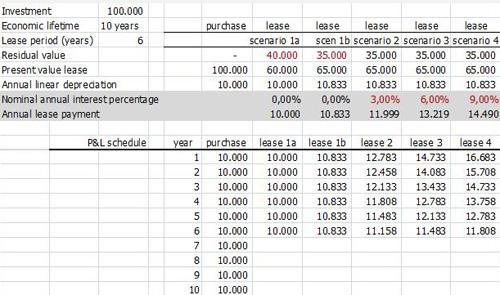 The difference between the annual linear depreciation and the full P&L charge of course is the calculated interest included in the lease which together, every year, is different from the cash-out paid.

The only exception, when P&L on purchase and lease is equal, is the situation when both 0% interest applies and the residual value is equal to the carrying value of the purchase.

In other words: only at 0% interest, no residual value and the same amortization period, outcome for a lease equals a purchase.

Cash is king and profit just an illusion.

Disclosures may support the proper view on leases. Equally important is the correct view on PPE. The current ideas on disclosures for leases suggest leases to be the exception to be disclosed. However, analysts should at least worry as much about PPE’s where relevant information hasn’t been disclosed up to date.

Not showing interest charges for PPE and not disclosing the residual value risks (obsolescence, market developments) on assets in fact can be solved by entering into leases. Leases also have the added benefit of self-funding and self-liquidation and show cash-out while generating cash-in. PPE has cash-out at the start with no link to current business activities and cash-in in the years thereafter.

The one and only simple real solution for lease accounting is to go back to basics in leasing: from before IAS 17 when it was allowed to charge the P&L with the cash-out for the lease contract.

In combination with a balanced presentation of leased assets and lease liabilities (equal values), it prevents the requirement of unnecessary disclosures and is a recognition that a lease is not a PPE, even when it involves the same type of equipment.

One last word: See the below carrying (book) values in the same example as used above.

Long-term leases will boom under the proposed guidelines: at some additional cost for getting residual values off the books, ‘new’ balance sheet totals can be deflated compared to the situation of having PPE’s. But more importantly: cash-out at onset (CCY100,000 in the example) can be avoided, improving liquidity positions considerably. The main benefit of leases, now already, is keeping cash in the company. That will not change, whatever guidelines come into force.