Under IAS17, operating leases result in financial (monetary) obligations being set off in the income statement at the daily rate or, most commonly, the average monthly rate.

Under IFRS16, the interest and redemption components are derived from the lease liability and therefore have a 'monetary' face. But in the balance sheet the capitalisation, and in the profit and loss account the depreciation amount of the leased asset, is included in the country/functional currency. Just to illustrate, an example in journal entries is presented.

The lessor calculates a monthly lease payment in US dollars of $1,328.25. The present value for 72 months @ 3.6% is then $85,895. The following currencies and imaginary currency rates are used:

The foreign currency contract is in US dollars ($), with reporting and functional currency provided in Euro (€).

Journal entries are shown below: 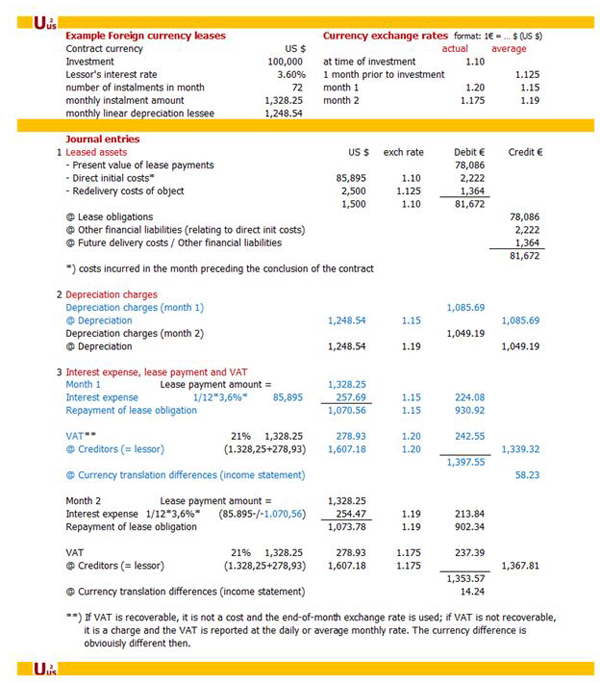 But there is another currency valuation effect: the revaluation of the remaining lease obligation at the end of the 1st and end of the 2nd month, compared to the previous period:

Whereas ultimately, over the full lease period, leased assets and lease liabilities become zero, this is not the case for the currency effects: the currency impact over the entire term is not automatically equal to zero.

Think, for example, about the hypothetical scenario, that the exchange rate as from month 2 onwards will remain at 1.175 both at the month-end and as an average; there will then no longer be any offsetting entries in the Currency translation account.

Another example: when after investment, the exchange rate is structurally less favourable (higher compared to the Euro in this example), there will still be a permanent currency effect in the result.