The average amount financed for a new car in the UK reached a record high in September as the value of advances grew despite shrinking vehicle sales, new figures from the Finance and Leasing Association show.

The value of new business in the point-of-sale (POS) consumer new car finance market grew by 5% in September compared with the same month in 2018, while new business volumes fell by 1% over the same period.

This drove the average amount financed to £21,563, 5% more than the same period last year, as consumers opt for more expensive vehicles, such as SUVs and an increasing number of plug-in vehicles, which carry a price premium compared to traditional petrol and diesel models.

The percentage of private new car sales financed by FLA members through the POS during September was 91.1% in the 12 months to September 2019.

The POS consumer used car finance market continued its strong run of growth in September, with a 12% increase in value and 9% improvement in volume, compared with the same month in 2018.

Geraldine Kilkelly, head of research and chief economist at the FLA, said: “In September, the POS consumer used car finance market reported its strongest growth since August 2018, which contributed to an increase in new business volumes of 5% in Q3 2019 as a whole. 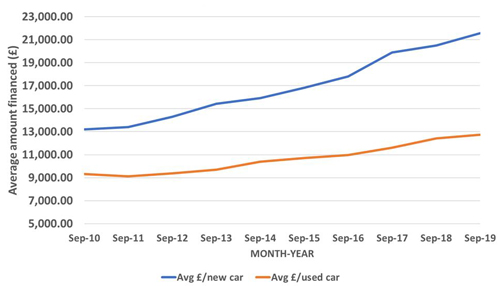