A strong end of year performance for the UK car market resulted in advances for consumer car finance growing 3% in 2019, compared to the previous year, according to new data.

The Finance and Leasing Association reports that the value of new business reached £38 billion, even though the number of cars financed remained static at around 2.4 million.

Annual growth was mainly driven by the used car finance market, where advances rose 4% year-on-year, as the number of cars funded increased 2%.

The new car finance market saw a 1% rise in advances, despite a 3% fall in the number of new cars financed to just over 933,000, as buyers opted for bigger, more expensive models, such as SUVs. 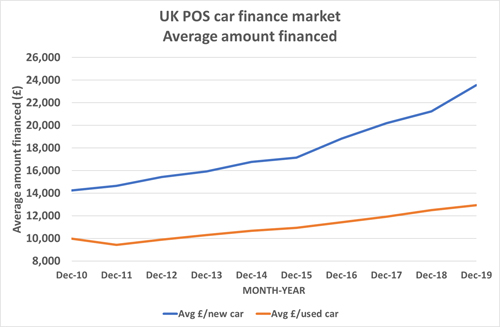 In December, there was strong growth across the board.

The value of advances rose 15% in the new car market during the month, compared to the same period in 2018, while new car sales were up 4%.

The percentage of private new car sales financed by FLA members was 91.7% in the 12 months to December 2019.

In the used car market during December, the value of advances grew 11% as car sales rose 7% year-on-year.

Geraldine Kilkelly, head of research and chief economist at the FLA, said: “The performance of the consumer car finance market in 2019 was in line with expectations.

“A similar performance of broadly stable new business volumes overall in 2020 is likely if we see a pick-up in consumer confidence.