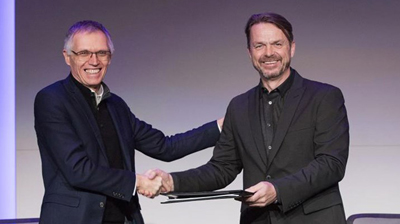 Fiat Chrysler Automobiles (FCA) and Groupe PSA, the owner of the Peugeot and Citroen brands, have agreed a merger of their businesses to create the world’s fourth largest vehicle manufacturer by volume.

The combined company will have predicted annual unit sales of nearly 9 million vehicles, with revenues of almost €170 billion.

It will compete in vehicle segments ranging from luxury, premium, and mainstream passenger cars through to SUVs and trucks and light commercial vehicles and play to the different regional strengths of the partners, executives said.

FCA is particularly strong in North America and Latin America, while Groupe PSA has substantial market share across Europe.

An estimated 46% of revenues will come from European markets and 43% from North America.

The merger is expected to drive efficiencies through shared vehicle platforms, while freeing up capital to invest in the changing automotive landscape, amid a focus on vehicles that are autonomous, connected, electric and shared (ACES).

More than two-thirds of the group’s volumes will be concentrated on two platforms, with approximately 3 million cars per year from a combined small vehicle platform and an equal number from a compact/mid-size platform.

Although cost reductions are expected to reach nearly €4 billion, there are no planned factory closures, executives said.

A new Dutch parent company will be created, along with an 11-member board, with five executives from FCA, including John Elkann as chairman, and five from Groupe PSA, including the senior independent director and the vice-chairman.

PSA's chief executive officer Carlos Tavares (pictured left), who becomes chief executive officer of the merged group, said: “Our merger is a huge opportunity to take a stronger position in the auto industry as we seek to master the transition to a world of clean, safe and sustainable mobility and to provide our customers with world-class products, technology and services. I have every confidence that with their immense talent and their collaborative mindset, our teams will succeed in delivering maximized performance with vigour and enthusiasm.”

Mike Manley (pictured right), chief executive officer of FCA, said: “This is a union of two companies with incredible brands and a skilled and dedicated workforce. Both have faced the toughest of times and have emerged as agile, smart, formidable competitors. Our people share a common trait - they see challenges as opportunities to be embraced and the path to making us better at what we do."

investing in the future of transport

The two groups have already invested heavily in projects to support the transition to an ACES-based transport system.

This year, Fiat Chrysler Automobiles launched a new in-vehicle commerce platform through which customers can order and pay for fuel or food and book reservations.

The platform is initially deploying in the US during the second half of 2019 via an over-the-air update for its connected cars, covering model-year 2019 and 2020 Chrysler, Dodge, Jeep and Ram brand vehicles equipped with 8.4-inch touchscreens, while all new touchscreen-equipped models will feature the service in a global roll-out. FCA expects all its vehicles to be connected by 2022.

Earlier this year, Fiat Chrysler Automobiles trialled two forms of car-sharing services for owners of Jeeps. The first, with start-up Turo, focused on peer-to-peer sharing, and a second subscription service with Avis let owners swap their Jeeps for other vehicles for short periods.

It has also partnered with autonomous vehicle specialist Waymo, with an agreement to add up to 62,000 Chrysler Pacifica hybrid minivans to Waymo’s self-driving fleet.

In addition to a wealth of ACES initiatives, the companies have a wide range of auto finance arrangements, including Fiat Chrysler Automobile’s partnership with Santander Consumer USA, which was updated this year.

The manufacturer’s banking arm, FCA Bank, operates Leasys, a joint venture between Fiat Chrysler Automobiles and Crédit Agricole that started in September 2001 and currently manages a fleet of more than 215,000 units in Italy and six other European markets.

The captive finance arm is currently implementing a plan to extend its finance to one-third of vehicles sold while extending its full-service leasing offer to new markets.

It also plans to widen availability of mobility packages that combine leasing, insurance and service products.

Further details of the shape of its auto finance arrangements are expected to be revealed in 2020.

Following the announcement, David Leggett, automotive editor at GlobalData, a leading data and analytics company, said: “The planned merger between these two big vehicle makers is not over the line yet, but they have moved rapidly to get to this agreement. The deal also highlights the importance of scale and shared investment in expensive advanced technologies - such as electrification and autonomous drive - as the auto industry faces up to transformation over the next 10 years.

"This news is not unexpected, given that both companies have been actively exploring tie-ups with others to yield cost savings and other synergistic benefits.”

The merger comes as Volvo Group and Isuzu Motors also signed a Memorandum of Understanding to form a strategic alliance in commercial vehicles, while Daimler and BMW merged their mobility services arms to fund global expansion.

Ford and Volkswagen have also announced a strategic alliance for commercial vehicles, starting with vans and pickups in 2022.

Leggett added: “GlobalData’s analysis of the industry suggests that we will see more strategic collaborations in the auto industry in 2020 as competitive conditions intensify and companies come under increasing pressure to take action to both control costs and position for transformational change in mobility and the structure of the automotive industry."