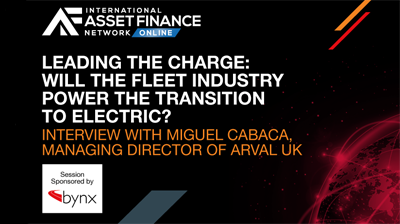 Two of the UK’s most experienced leasing industry executives will give their insights into the industry’s transition to electric vehicles at a major online seminar.

Miguel Cabaca, managing director of Arval UK and Ian Tilbrook, former fleet director of Volkswagen Financial Services, will give their expert opinion on the impact of new plans announced by UK Prime Minister Boris Johnson to ban the sale of new petrol and diesel powered cars and vans by 2030.

They will be joined by Toby Poston, director of corporate affairs at the British Vehicle Rental and Leasing Association for the event, which will be hosted by IAFN co-founders Edward Peck and Brian Rogerson, along with industry expert David Betteley.

Under the EV transition plan, the sale of cars and vans that are solely powered by petrol and diesel will be outlawed in 2030, while hybrids will be banned from 2035.

The transition, which will need legislative approval, will be backed by billions of pounds of investment in infrastructure and grants.

Some fleet operators are already driving the transition, including several of Britain’s biggest fleets.

A coalition of fleets running more than 400,000 cars and vans had already called on the government to bring forward the date for a ban on new diesel and petrol vehicles, when officials originally targeted a 2040 deadline.

The Climate Group’s EV100 initiative also lists dozens more companies with a public commitment to a zero-emission future, including several leasing companies; some members are targeting an EV deadline of 2025 for thousands of their fleet vehicles.

Despite the ambition of many businesses, challenges remain, especially for suppliers such as leasing companies, who are tasked with sourcing and managing a multi-billion-pound fleet with no historic experience on which to base cost estimates.

However, the BVRLA’s recently announced Plug-in Pledge shows the industry’s commitment to supporting customers through change and overcoming challenges as they emerge.

The IAFN Online session will look at the issue from the perspective of industry leaders, who carefully balance customer expectations with a commitment to investors.

The potential difficulties facing business leaders are increased by the uncertainty that continues to surround Brexit trade negotiations, with just weeks left until the time for reaching an agreement runs out.

The IAFN Online website hosts a wealth of conference insights as a digital hub for asset finance industry leadership and insights.

It offers a unique online resource that enhances the IAFN’s physical event programme and provides a long-term source of on-demand insights and training for industry leaders and professionals.